A Tale of Two Weekends 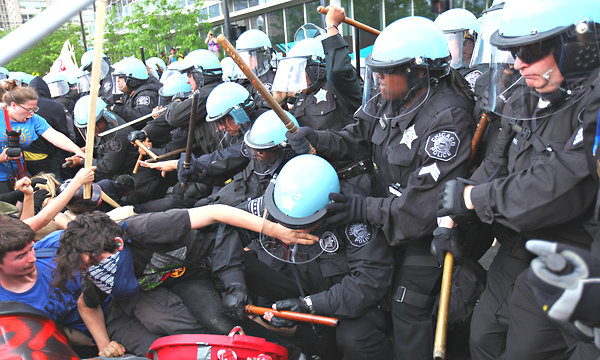 Thousands of protesters took to the streets of Chicago this weekend railing against, among other things, the fact that Mayor Rahm Emanuel authorized a remarkable $55 million to host the NATO summit, while a measly $2-3 million dollars is all it would take to keep some community mental health facilities open in that city, yet that funding has been cut.

The Center for Research on Globalization notes

THE U.S. national security apparatus is mobilizing astonishing numbers of police for the NATO summit–and creating an atmosphere of fear meant to permeate the city of Chicago.

“Police officers from Philadelphia, Milwaukee and Charlotte-Mecklenburg, N.C.; will assist the Chicago Police Department in handling thousands of protesters expected to descend on Chicago for this weekend’s NATO summit,” according to the Chicago Sun-Times.

More than 500 National Guard troops will be activated alongside 3,100 Chicago police assigned to NATO security and 700 Illinois state troopers. The total number of armed personnel in Chicago this weekend could top 5,000.

The cost of the summit is officially estimated at $55 million, but the actual costs of hosting such summits usually exceed the projections. Mayor Rahm Emanuel has attempted to mute criticism of the outlandish expense of hosting the summit by insisting that it won’t cost taxpayers because city officials are appealing to “corporate citizens” to cover the costs through donations.

Meanwhile, Chicago is pushing through the closure of half of the city’s mental health clinics for poor and uninsured residents–despite an inspiring campaign by mental health advocates and activists organizing against the closures.

If Emanuel has such ready access to corporate cash, why can’t he scare some up for mental health care? The city says the closure will only “save” $3 million–though it may not even be that after taking into account the cost of treating mental health patients in emergency rooms or city and county jails. Some of Chicago’s “corporate citizens” could find that in petty cash.

That’s just one issue out of many that brought a number of diverse groups of protesters to the Windy City.

Some were veterans, giving back their medals; some were nurses protesting our insane health “care” system; some were students mired in student debt while others were would-be students without the resources to get an education.  And on and on goes the list.

Citizen and credential journalists were roughed up by the Chicago Police, and the world leaders met, seemingly oblivious to the wants and needs of the world’s citizens.

Meanwhile, down here in South Florida, I took a very difficult step in asking publicly for help to get help for my daughter.  You can read the whole thing here  (helpmehelpmydaughter.wordpress.com) if you like, but basically, we’re all struggling with her ADHD and I don’t know where else to turn.  I found out about a great treatment program run by FIU that will teach her how to “do school” and teach me how to help her.

The rub is the cost.  Some private insurance plans cover it, but hers doesn’t.  And my finances won’t cover what it costs…

Many of the issues that had people in the streets in Chicago this weekend and had me blegging for help from South Florida could be assuaged simply by ending the endless wars, returning the tax rates to what they were under Clinton, and stopping all the corporate welfare.

In the meantime, life goes on.  I still believe the best path to change in this country is with an inside/outside strategy.  The OWS movement is rocking the outside part of it, but we need to get together and elect as many real progressives as possible to local and state office and certainly to Congress!

This morning, I’ll speak with Digby who is one of the people behind the Blue America PAC.  We’ll talk about this, and specifically the wonderful candidate from California’s 2nd district, Norman Solomon.

And, as it’s Monday, we’ll spend the second hour with Crooks & Liars‘ Nicole Belle, finding out how the Sunday shows covered these issues… or not.  Here’s her write-up for today:

It was a mixed bag of memes the Sunday anchors went after this week. All of them pushed the general election horse race, which frankly, is much closer than it should be, which is just the way the media likes it.

So that’s why Candy Crowley didn’t guffaw right in the face of RNC Chief Reince Priebus when he said that it’s all President Obama’s fault that we know a superPAC was putting together an ad supporting Mitt Romney that raised once again the specter of Rev. Jeremiah Wright. Next I expect Priebus to blame black people for racism and battered wives for domestic abuse’

And when George Stephanopoulos asks the Leader of the biggest do-nothing House of Representatives about his failure of leadership, it is of course, not his fault. John Boehner likens controlling his own caucus (his own, mind you, not the minority party) to 218 frogs in a wheelbarrow.

Ayn Rand’s biggest disciple (though not officially) Paul Ryan tells David Gregory we can avoid European-style austerity by cutting spending. No, that’s not a joke. Ryan thinks that his ending Medicare as we know it and slashing transportation and education will actually pre-empt austerity.

Note to the Obama administration: when you send out a surrogate to the Sunday shows, make sure they don’t sandbag your messaging. Just as Cory Booker did by dismissing the vulture capitalism of Bain under Mitt Romney’s control. Booker got so much pushback from outraged liberals on Twitter and in the blogs that he felt compelled to respond with a special video later in the afternoon.

And finally, because I think it needs to be said, Howard Kurtz spoke to former Daily Show field producer Mike Rubens, who wrote a blog on Salon saying that he was surprised to learn that he couldn’t bring himself to hate some of his subjects, despite finding their political viewpoints absurd at best, and evil at worst. Kurtz was more interested in him saying that liberals could be jerks too, but I think the entire interview—the very notion that it’s surprising that someone who doesn’t share your political views could still be a reasonable human being—plays to everything that’s wrong with our society. It is a reductive. cartoonish mind that thinks people are all good or all bad. Dick Cheney and I share similar outlooks regarding gay rights than President Obama and I do. Don’t hate people. Hate their actions. If someone advocates a policy or position that brings harm to millions of people, I really don’t care how personally lovable they appear.