A Sad Day in Broadcasting History 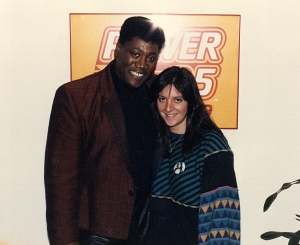 Legendary NY radio station WPLJ signs off the air for the last time today. In place since February 14, 1971, the station’s call letters changed to from WABC-FM to WPLJ, chosen after Allen Shaw noticed the letter combination as the name of a song on the 1970 Mothers of Invention record, Burnt Weeny Sandwich.  The station at 95.5FM in NY will then begin playing Christian Rock.

I was lucky enough to work at WPLJ from 1985-1987 as the producer of Jim Kerr and the Morning Crew. The crew included the amazing Shelli Sonstein, Howard the Cabdriver, Susan the Landlord, Gerard the human laugh track and occasionally Bartender Steve McPartlin on sports.

I dug through the big box o tapes in my garage and found a few airchecks from those days.  Enjoy!

From 1986 — The Iran-Contra Tower Commission Report was released. Though we rarely dealt with politics, Jim had some fun with it.

Also from 1986, this was a fun bit in which Jim went riffing on town names in the tri-state area

One more for now. I was (and still am) a huge Bruce Springsteen fan. I got to review his new live 5-record box set “Live 1975-85”.  I was so young, and this is really embarrassing to listen to now, but it is what it is…