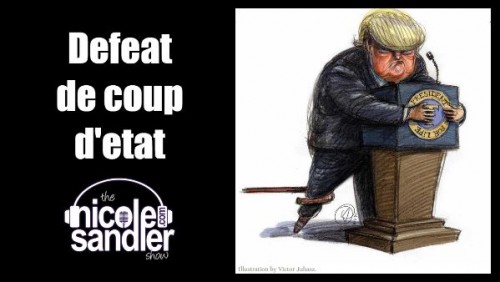 Today marks the 19th anniversary of the 9-11 attacks on our country. It may be unpopular to say it out loud, but Osama bin Laden won. He got exactly what he wanted — to destroy the American way of life. And that destruction will be complete if Donald Trump is able to rule for a second term.

There’s widespread belief that the Trump cabal is already engaged in a coup, and fears abound that they’ll take it to a democracy-crushing conclusion around the upcoming election.

Author and journalist Sasha Abramsky wrote the Sept 7 cover story for The Nation magazine, “Is Trump Planning a Coup d’Etat?”  He joins us today to discuss the frightening possibilities and what we can do to head it off.

I urge you to read that article. And be sure to click through to read the 22-page report issued by the Transition Integrity Project, which played out a series of 2020 election scenarios, and their results are stunning.

The bottom line is that Trump is setting the wheels in motion for a violent response to the election if he is defeated. We are at a crossroads, and must make plans to defend ourselves and our country from these traitors. This is a subject we’ll definitely be revisiting.

We had a great funny today, a parody courtesy of the Man, Woman, Camera Parody people…