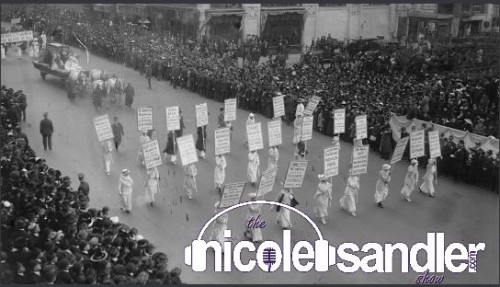 Today marks the 100th anniversary of the ratification of the 19th Amendment, when women won the right to vote. It’s not exactly been an easy climb since then, but it is a centennial we must acknowledge. So Cultural HERstorian Amy Simon, the woman behind the play She’s History: The Most Dangerous Women in America, Then & Now” joins me to regale us with some fabulous female stories about the women who came before us.

For info on some of the week’s festivities and the amazing women Amy told us about today, visit the National Women’s History Alliance.

The 2020 Democratic National Convention began last night in all of its virtual glory. Bernie Sanders showed why so many of us love and respect him. He explained why we must get Donald Trump out of office. And Michelle Obama said exactly what needed to be said, and she said it perfectly. I’ll embed both of those appearances below.

But first, “The Rising”. Bruce helped us heal after 9-11 with the album The Rising. Hearing the song last night playing over these images gave me hope that it’ll help us heal from the ravages of Donald fucking Trump.

Today’s funny was from The NikkiNoo Show. She says this is her first try at a parody video.

And here’s the video of today’s show, for those who like to watch…