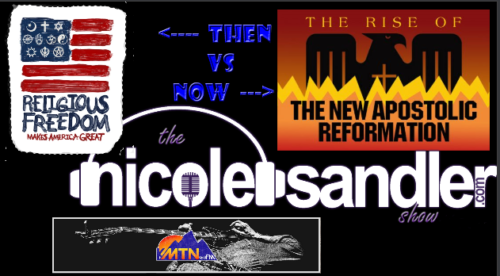 Yesterday, primary elections were held in Wyoming and Alaska, and the results are pretty much what we expected. But there were some unusual voting patterns in parts of Wyoming, so this morning I called the one person I know there.

My old friend Mark “Fish” Fishman is Program Director and hosts mornings on KMTN 96.9FM in Jackson. (Click on the link to listen to their live stream. It’s great Triple A radio at its eclectic best — though they could use a few more people playing the tunes).

Then we’ll turn our attention to the crazy religious zealotry I mentioned in the title of the episode. Frederick Clarkson was on with me just over a month ago, after he wrote a piece in Salon about Pennsylvania’s Republican gubernatorial nominee Doug Mastriano, who’s as out there as they come.

Well, now Fred has published an article at ReligionDispatches.org about a rift within the New Apostolic Refomation.

We’ll check in with Fred again because this is a movement we must not only keep an eye on, but have to counter- so please help spread the word about what’s going on. You’re certainly not hearing about it in the mainstream corporate media!