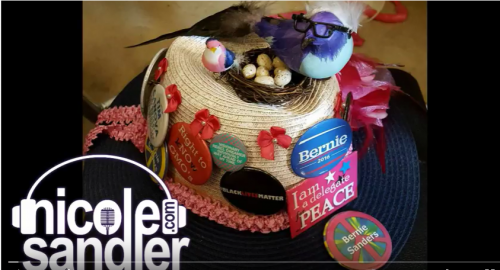 I know I’m not alone this week. I’m conflicted. There’s as much conflict going on in my mind as there is in the Wells Fargo Arena, the ironic name of the arena where the Democrats are nominating Hillary Clinton as their nominee to run against the Republican Donald Trump.

I feel like I’m writing this in the middle of a bad dystopian novel in which the two most hated people in the nation are vying for the presidency. Oh, wait.

Anyway, today, I let the conflict play out. I offended some people, and probably confused many more. Welcome to the next few years.

My friend Hillary Keyes is a Bernie delegate from the next congressional district from where I live checked in from the bus on the way to the convention center. And it’s Tuesday, so GottaLaff  hung with me during the second hour.

I shared most of this Shaun King article from the NY Daily News and, for once, remembered to post it here. Do read it. It’s quite worthwhile. “To Stop Donald Trump, I’ll be voting for Hillary Clinton.”