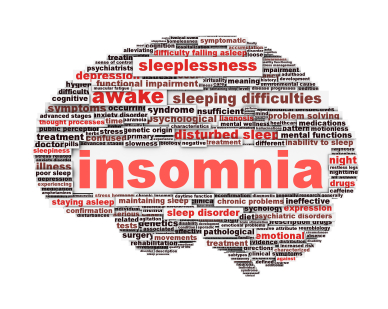 I’ve had sleep issues for a long time. In 1997, I was living in San Diego, co-hosting the 91X “Brand X” Morning Show with my friend Chris Cantore, when he noticed that I was more tired and irritable than usual. I explained that I had this weird sensation in my legs that not only kept me awake each night, but prevented me from even lying down! I described the sensation as feeling like thousands of ants were crawling around inside my legs, not allowing me a moment’s rest. When I did sit or lie still, the “ants” would start crawling, making me shake my legs or get up and walk around to stop the sensations.

The phone began ringing with listeners explaining to me that it was, indeed, a “thing” — a condition called Restless Leg Syndrome. Over the ensuing almost 30 years, I’ve battled this condition. On the nights when I’m lucky enough to not be bothered by the creepy crawlies wreaking havoc inside my legs, my mind often keeps me awake. Plus, I snore. Loudly, David tells me. Between all of these sleep afflictions, I’ve moved onto an air bed in the living room. (The mattress is actually wonderfully comfortable, though it sucks not to sleep in the same bed as my husband.) In addition, I’ve known that my lack of the ability to get a restful, full night’s sleep most nights is truly detrimental to my overall health, so I made an appointment with a well-regarded pulmonologist that finally was on the calendar for the Wednesday July 13.

When Dr. Whitmore entered the room, he asked what brought me there. I explained it all to him as he listened. Then he had me go take two breathing tests while he reviewed my records.

When we reconvened, the doctor explained that although my sleep issues were troublesome, he wanted to put them aside and deal with the even more worrisome mass that was visible on the x-ray done at the first hospital a few days earlier.

He explained that he wanted to go straight for the most comprehensive test available, a combination PET-CT scan which would show not only the size and location of the tumor, but whether or not it had spread. Of course, the Orwellian-named United Healthcare denied the doctor’s order.

(We later learned that if your doctor wastes enough time and manpower to hound them and ask at least three times, they’ll eventually relent and approve the test. I guess when you’re using “administrative costs” to ratchet up the health care  costs , this is standard operating procedure.

So, I first had a regular CAT scan. These days are foggy, so my best recollections are as follows:

CT scan on Monday, July 18 showed that yes, Arnold, it is a tumor. My pulmonologist called me within an hour after the test to tell me that we needed to move quickly and schedule the biopsy and the PET-CT, which UHC finally decided to approve.

On Wednesday, July 20, I went in for the biopsy.

Needle biopsy. After a local anesthetic is given, the doctor uses a needle that is guided through the chest wall into a suspicious area with computed tomography (CT or CAT scan)or fluoroscopy (a type of X-ray “movie”) to obtain a tissue sample. This type of biopsy may also be referred to as a closed, transthoracic, or percutaneous (through the skin) biopsy.

Don’t let anyone tell you that this doesn’t hurt. It does. The biopsy was done first thing in the morning, and I was told I wouldn’t have any results until I met with the oncologist on Monday.

On Thursday, July 21, I went up to the studio to do my show as usual, as the best thing I can do right now is work to keep my mind off of cancer. About an hour before showtime, my phone rang. It was the pulmonologist calling again. He told me he ran into the pathologist who said the early preliminary results show cancer. It appears to be adenocarcinoma, or Non Small Cell Lung Cancer. He explained that we’ll get more information when the full results are available. Monday can’t come quickly enough.

On Friday, July 22, I had the long-awaited (and first denied by UHC) PET-CT scan. I left the imaging center with a disc of the scans to take with me on Monday, and have spent the weekend trying to figure out if the cancer has metastasized outside of the lung. 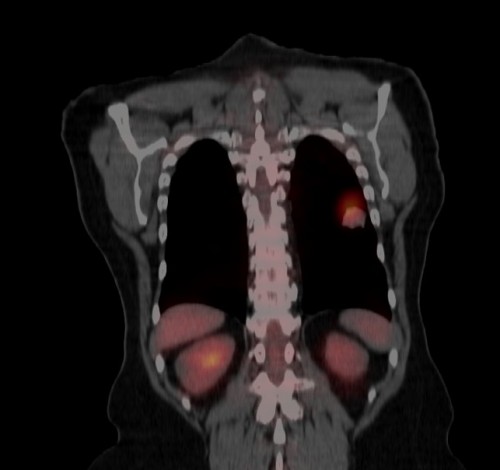 My adage, a little knowledge is a dangerous thing, applies to medical situations as well as political!

So I spent the weekend proving Tom Petty to be spot on!