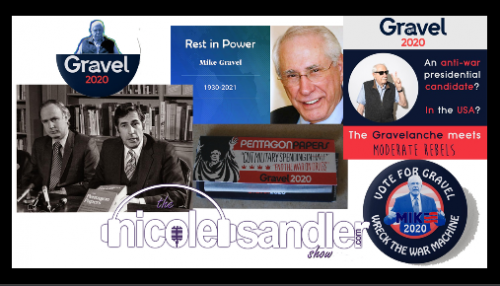 Former senator and two-time presidential candidate Mike Gravel died this weekend. His presidential runs were more a curiosity than serious, and Gravel was often the butt of jokes. But he was an American hero, dating back to his first term in the senate.

It was 1971. Daniel Ellsberg desperately wanted a member of Congress to read the Pentagon Papers into the official congressional record. The one who stood up and did it was Mike Gravel.

Today on the show, I’ll share a bit of the background of the story, John Nichols’ article for The Nation that pays tribute to the man, and the interview he did with me in April of 2019 during his final run for the presidency.

At a time when we need elected officials who are in it for the correct reasons, I honor the late Mike Gravel.

I found some video of Sen. Gravel reading the Pentagon Papers into the Congressional Record. This first clip is the short one I played on the show today, when he broke down and cried.

And here is a longer cut from the same night