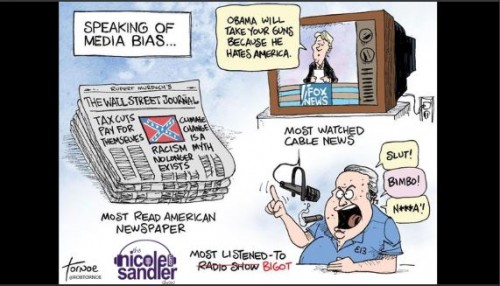 Yesterday, Donald Trump fired FBI director James Comey. I can’t say I’m sorry to see Comey go, but there’s a time and place for everything, and this wasn’t it! The question now is how the FBI investigation into Russian interference in the 2016 election will continue with a Trump-appointed FBI chief and Jeff Sessions as Attorney General. Autocracy, here we come.

Today on the show, I brought us up to date on where we are will all of that, and even took a few calls before moving on to our media problem. As the name of the post implies, “the liberal media” is already lost…. except for the handful of outlets you can find at theliberal.media (if you know of someone I left off who belongs on the list, please let me know). And it’s about to get a whole lot worse.

My guest today was Isaiah Poole, communications director at Peoples Action, the group behind OurFuture.org. We’re on a few listservs together, and something he wrote made me invite him on the show today, as it’s a story very few people know about. But if you think things will get better because Fox so-called News is dying, think again. Sinclair Broadcasting is buying Tribune Broadcasting, and the right wing crazy is about to be amplified exponentially.

Isaiah gave me permission to re-post what he wrote. Read it and spread the word:

I was just looking through my long-neglected listservs to see if any of my progressive allies are as worked up as I am over the news that Sinclair Broadcasting just agreed to purchase Tribune Broadcasting.

Why am I bringing this up? From The Washington Post: Sinclair “currently reaches viewers in 81 metropolitan areas. If it completes its deal for Tribune, it will reach nearly 70 percent of all television households.”

That’s right: 70 percent. What will it do with that 70 percent reach? If you live in a community with a Sinclair-owned station, you probably already know the answer.

Sinclair has been criticized for using its many stations to push Republican presidential candidates since at least 2004 when it announced it would air a documentary critical of Democratic candidate John F. Kerry but backed down amid pressure. It drew criticism from Democrats on the eve of the 2012 election when its stations in several battleground states aired a half-hour news “special” that faulted President Obama for his handling of the economy, his signature health-care law and the terrorist attack on a U.S. installation in Benghazi, Libya.

The company, which is controlled by David Smith and his three brothers, quickly drew WJLA to the right after purchasing it.

In the most recent campaign, WJLA, and Sinclair stations around the country, gave a disproportionate amount of neutral or favorable coverage to candidate Donald Trump compared with his rival, Hillary Clinton, according to internal documents supplied by people at WJLA. Sinclair officials pointed out that Trump and his surrogates were far more accessible to Sinclair’s reporters than Clinton.

Among the stories that Sinclair’s managers ordered stations to air were those questioning Clinton’s handling of her controversial email server, the documents show. Another “must-run” report — about her health — included this internal description: “Why did Hillary Clinton struggle with disclosing her medical diagnosis? She has been repeatedly faced with previous questions of trust. Can a president lead with so many questions of transparency and trust?”

There were no equivalent “must-run” stories examining Trump’s refusal to release his medical, draft or tax records, or the immigration records of his wife, Melania. But there was a story titled “Donald Trump Reflections of 9/11,” and a feature about women who were campaigning for Trump that included an interview with his daughter-in-law Lara.

Since its purchase of WJLA, Sinclair has added commentaries from Mark Hyman, a Sinclair executive and conservative pundit who also appears on many Sinclair-owned stations. During the campaign, Hyman regularly criticized Clinton and praised Trump. “Most Americans know very little about the leaked Clinton emails,” he said in one such commentary during the campaign’s waning days. “Major news organizations buried the most damaging. So we’re sharing some with you.”

The company has also added regular public-affairs programs produced from Washington and hosted by conservatives Sharyl Attkisson and Armstrong Williams, who served as Ben Carson’s business manager during Carson’s presidential campaign. Williams and Sinclair are business partners; in 2013, he acquired TV stations from Sinclair when the company reached federal limits on station ownership.

As you see, the “liberal media” has nothing on Sinclair’s determination to use its network of local news outlets to warp the political conversation. Thanks to Ajit Pai at the Federal Communications Commission and to Republican enablers in Congress, we are rapidly replicating something remarkably like the Russian media model, where a handful of oligarchs loyal to the presidency control much of the flow of information to the public, and those outlets not overtly loyal to the president are declared “enemies of the people” and are placed under threat.

In an ideal world, the Sinclair deal wouldn’t even be a thing. If it was a thing, there would be deafening protests. And there would be serious discussions on the left about how to build up the media heft to counteract the influence of organizations like Sinclair that invest billions in promulgating right-wing ideology and slanted news.

At least, we shouldn’t just allow this to be a one-sentence media story. It’s really a big deal when one right-wing outlet has a megaphone that covers 70 percent of local news markets and has no obligation to use that megaphone for a broader public good but instead aims to use it to put a very big thumb on one side of our political debate.