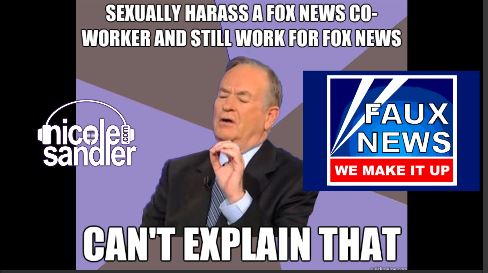 Fox News and its “star” “personality” Bill O’Reilly have something in common with the president in addition to their propensity for making shit up: they’re all sexual harassers. All have been sued numerous times for their illegal and unwarranted advances on women, with Fox and O’Reilly ponying up many millions of dollars to settle with a number of them. And now advertisers are fleeing!

For some unknown reason, Fox just signed O’Reilly to a new $18 million a year contract, even as the new allegations pile up. I guess it’s a good thing he makes that much  money, as he’s already paid out over $10 million to settle, with more likely to come.

Let’s say it together: Eeeew.

There were many other stories to talk with Laffy about today including Syria’s latest chemical attack on its people. Although the NY Times headline says “US Blames Assad,” the orange thing that sits in the oval office these days actually put out a statement blaming his predecessor President Obama for this attack.

Words pretty much fail me right about now.

Thankfully, I can go to the LA Times Op-Ed page and re-read parts 1-3 of their editorial takedown of president D’ump. The 4th and final part hits tomorrow.