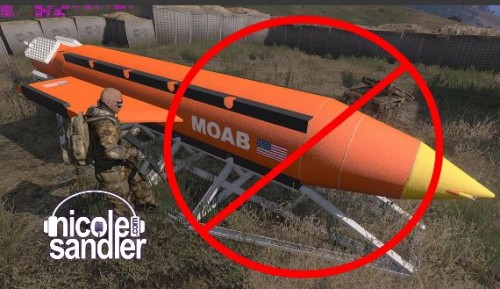 Today, the “US” dropped the MOAB (Mother of all Bombs) – the largest non-nuclear bomb ever deployed in Afghanistan, ostensibly against ISIS-K. Of course, they tell us that they “took every precaution to avoid civilian casualties.” Of course they did, like they did in this airstrike in Syria (that the administration has been silent about) that hit Syrian allies and killed 18 people!

As a bit of a lighthearted diversion, I invited my Facebook page to weigh in with their favorite euphemism for “Trump.” As you know, I prefer the contraction of Donald Trump – D’ump. But there were some great suggestions here.

It’s Thursday, so Howie Klein is here to talk about what happened in the Kansas special election on Tuesday, next week in Georgia, and these two stories: “The DCCC Is Still Recruiting “Ex”-Republicans” and “How Do You Know When A Candidate With A “D” Next To His Name Isn’t Really A Democrat?“

And don’t forget, if you’d like to help the progressives running in the special elections and who’ve already declared for 2018, Blue America gives the money directly to the campaign without taking any cut for themselves and you know if they’re raising money for them, they’ve been vetted as true progressives…