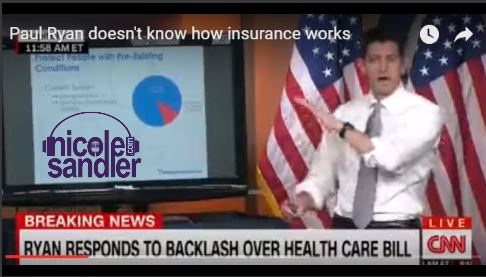 The D’ump administration and the Republican clown party are puling out all the stops to try to sell you on their awful plan to replace the Affordable Care Act. Rather than tell you what’s good about it (they can’t because there’s nothing in that column), they instead are lying to you about what’s wrong with the program currently in place.

I’m the first to tell you there’s plenty that’s wrong with the ACA, but the pieces are all in place to improve upon. Instead of doing what’s in the best interests of the nation, they want to tear it down completely, and take 24 million Americans down with it!

To that end, the White House sent out a despicable email yesterday. I’m not on their mailing list, but my friend Dave Johnson received this, asking for his “Obamacare horror story”!

Obamacare has been a complete failure since the beginning, and things are only getting worse.

Today, President Donald J. Trump held a listening session to hear directly from Americans who have experienced significant hardship as a result of Obamacare’s poor coverage and rising prices.

President Trump wants to hear from hard-working Americans like you. How has Obamacare affected you? Share your Obamacare disaster story.

During the meeting, one woman revealed that she had her health insurance cancelled three times since Obamacare became law. Another attendee had her insurance jump from $17,000 a year to a devastating $52,500 a year for her struggling family, while yet another said her health insurance now costs more than her mortgage. Obamacare came packaged as the healthcare solution for all Americans. Instead, the country was given hundreds of pages of broken promises. Millions of hard-working Americans have been impaired by soaring costs, cancelled plans, and overbearing mandates. As one of those innocent Americans, President Trump wants to hear your story about how this disastrous law has affected you and your family.
Share Your Story

This begs a question: Is that legal? Not that President Cheetoh Benito would care, but I don’t think government resources are supposed to be used in this manner.

That aside, we have a bigger issue. My Obamacare story is a pretty amazing one. I told a longer story on the air today, but I’ll share the one I posted to the site below, after I ask you a favor. PLEASE follow the link and share your ACA triumphs. Let’s not allow them to get away with this!

Here’s the horror story I sent in:

Before Obamacare, I was unable to buy health insurance. Once you reach 50, you’re assured of having at least one “pre-existing condition,” giving the insurance companies an excuse to deny you coverage.

I wound up taking a job I hated because they allowed me to buy into their plan. Unfortunately, it took my entire paycheck to pay the premium. Each year, the premiums went up as there was no law that controlled the costs. But I stayed at that job and kept working so I could have health insurance until the job ended and with it, my insurance ended too.

When the ACA took effect, I was able to find a policy on the exchange. I took the time to read each policy offered, and was able to find something that, with the subsidy, came in at a fairly reasonable price .

Each year, my premiums rose a bit – but they did before the ACA, so that was nothing new.

In July of 2016, I had an episode that appeared to be a heart attack. So I went to the Emergency Room. All the signs pointed to a heart attack including elevated Triponin levels, so they kept me over night and, in the morning, sent me to another hospital for an Angiogram.

Thankfully, the cardiologist eased my fears by telling me the results were great – not only was there no blockage, I didn’t have a heart attack, and my heart looked to be in excellent condition. However, the x-ray done at the first hospital showed a mass on my left lung.

Yes, I had to fight with United Health Care to get the PET-CT scan my doctor ordered, but they eventually agreed. That was followed by a biopsy that confirmed the presence of lung cancer.

More tests ensued, followed by surgery on August 30 to remove the lower lobe of my left lung and a wedge resection of the upper lobe. It turns out that I had two separate and distinct cancers growing in the two lobes of my left lung.

Just yesterday I had my six month follow-up with the surgeon and the oncologist, and got the results of my second quarterly CT scan. I am now six-months cancer free.

That is my Obamacare horror story. If not for Obamacare, I never would have gone to the ER when I suspected I had a heart attack, and wouldn’t have known that I had two cancerous tumors growing in my lung. Today, I’d likely be dying of lung cancer, a horror story if there ever was one.

Please stop this insanity. Fix the ACA, don’t kill it. If you do, you’re likely killing me too.