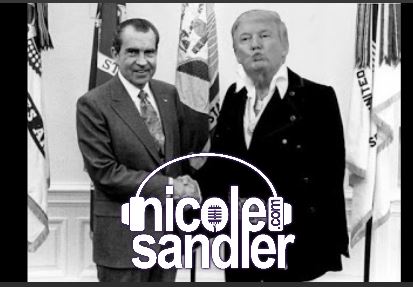 On August 9, 1974 I was on a Teen Tour. At 14 years old, I wasn’t engaged in politics. But I still remember the moment our counselor got up in the front of our bus and got on the PA to announce that Richard Nixon had resigned as president, and all of us cheered. It’s probably my first political memory and I thought we’d never have a president as corrupt and evil as Nixon again.

Now, 43 years later, I know how naive I was at 14. Today, I had the honor of speaking with John Dean, White House counsel to Richard Nixon from 1970-73, who helped blow the lid off of Watergate. I picked his brain about the similarities and differences between the two men and could have gone on for another hour. His insight is much appreciated as we go forward. For as paranoid and corrupt as Nixon was, Donald Trump seems to be in a league of his own.

You can read John Dean’s current columns here.  And find all of his books – including The Nixon Defense: What He Knew and When He Knew It,  Worse Than Watergate: The Secret Presidency of George W. Bush,  Conservatives Without Conscience and the others here.

Today’s Tuesday, so when I wrapped up with John Dean, I chatted with GottaLaff for a bit.

I did promise to post the New Yorker article (click)  and Rachel Maddow segment we referenced during the John Dean interview and, for once, I remembered.

Tomorrow, Joel Silberman will help me review D’ump’s first address before a joint session of Congress. The drinking game rules will, no doubt, be all over the interwebs. But I’m guessing that if your word is Russia, you’ll be stone cold sober at the end of the night.