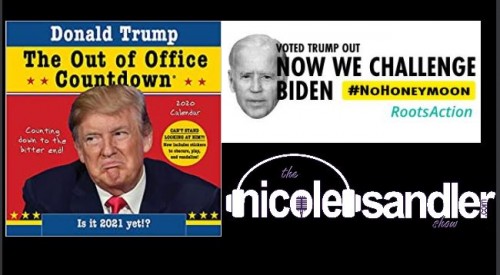 The closer we inch towards January 20 and the end of Trump’s reign of terror, the more unhinged the orange man becomes. I’ll have the latest news on his scorched earth tactics. Congress is still paralyzed, and the government will officially shut down tonight if they can’t come to a funding deal before midnight.

Right before showtime, I happened to hear Bernie Sanders on the Senate floor delivering an impassioned speech calling for direct payments of $1200 for every working class American and $500 for children. Here’s the video of his speech and the legislation he introduced.

We’re all hoping for better things with a Biden presidency, but we progressives can’t get complacent. We must push him to recognize the progressive wing of the party. To that end, Roots Action has launched #NoHoneymoon to push progressive priorities. He wrote “Bernie Sanders and Our Winter of Progressive Discontent” at Common Dreams to explain our position.  And just today, he wrote — or edited this Pete Buttigieg letter for Salon.com!

And then, Lauren Mayer channels both Sonny and Cher in “The Grift Goes On”