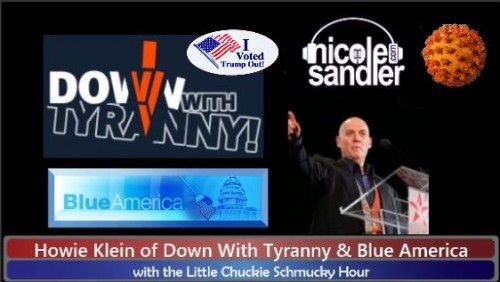 As we inch ever closer to January 20 and the orange menace becomes further unhinged, things in Washington DC get more precarious. As he does every Thursday, Howie Klein of Down with Tyranny and the Blue America PAC ise here to help try to make sense of our very strange situation.

This week also gave us a strange story about extraterrestrial life making contact, and apparently, the US and Israel are in on it. This was a serious story. Even NBC News covered it.

Despite the nonsense being fed by Trump to his followers about “voter fraud,” the only fraud continues to be the way the Republicans try to keep citizens – those who are more likely to vote for Democrats- from voting! Journalist Greg Palast has been investigating deep in that swamp, and today joins us, fresh from a virtual federal hearing in Atlanta courtroom where the purging of 198,000 voters is being challenged!

First, the very talented Heather Gardner teamed up with MidasTouch for this Queen parody

“Fucking Concede” is from Jen Houston