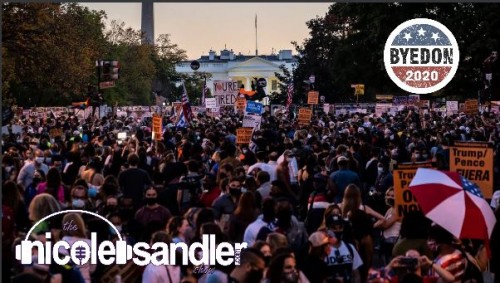 When we last met on Friday, it was apparent that Joe Biden would be the 46th President of the United States, but none of the usual suspects would make the call. So it dragged on for another day before CNN called Pennsylvania for Biden, pushing his total of Electoral College Votes past the 270 needed to win. And the other news organizations all fell into place.

The only entities not willing to concede that Trump lost are the Trump campaign and administration. I’ll spend most of the show today bringing you up to speed on what happened this weekend and today, and try to figure out what happens next.

In the last segment of today’s show, I’m joined by an old friend, musician Marvin Etzioni, co-founder of the band Lone Justice. Marvin has a new album out, What’s the Mood of the Country Now? and it works for this moment in history. We’ll meld the world of music and politics and see where it takes us…

First up, cassetteboy takes on Trump, with some help from Beck

Lauren Mayer got in on the act

And there was this one, from Tommy Edwin