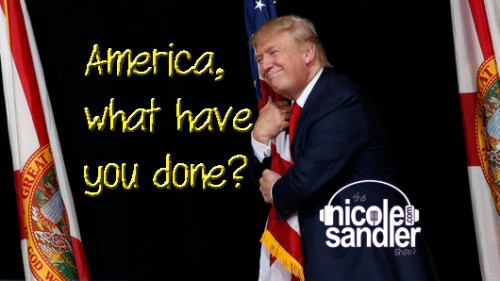 As much as I try to believe that things can’t be as bad as they seem, Donald Trump does something else to make me say, “Oh yes they can.”

This weekend, after the news broke that Jill Stein had raised enough money to finance recounts in the three very close swing states of Wisconsin, Michigan and Pennsylvania, Donald Trump lied to millions of Americans when he Tweeted

In addition to winning the Electoral College in a landslide, I won the popular vote if you deduct the millions of people who voted illegally

Politifact jumped in to declare it False (where’s the burning pants when you need ’em?) — and then did the work of tracing it back to its roots. Apparently, Donald is an Alex Jones fan. The man who makes a living off of conspiracy theories posted this on Facebook 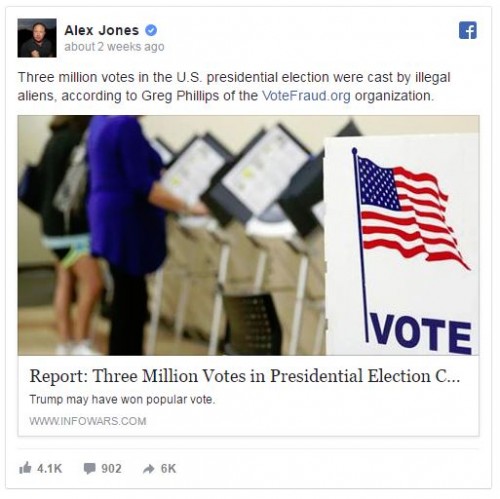 And D’ump fell for it, hook, line and sinker.

But what about “Greg Phillips of VoteFraud.org organization”? Politifact went looking and reported

So is there any truth to it?

Well, we don’t know for absolute certain. But the report is actually a tweet, and the person who authored the tweet won’t explain how he arrived at his figure. If that isn’t reason enough to be skeptical, independent experts and historical analyses suggest it’s highly suspect.

In other words, don’t buy it.

As evidence of its claim, InfoWars’ headline refers to a report from VoteFraud.org and tweets from Gregg Phillips, whose Twitter profile says he’s the founder of VoteStand, a voter fraud reporting app.

There is no report from VoteFraud.org, however, and Phillips told PolitiFact he is not affiliated with that website. The information comes from tweets made by from Phillips on Nov. 11 and Nov. 13.

We have verified more than three million votes cast by non-citizens.

We are joining .@TrueTheVote to initiate legal action. #unrigged

Phillips would not provide any additional information when asked by PolitiFact. He said he has chosen not to release more information because he is still working on analyzing the data and verifying its accuracy. Phillips would also not say what the data is or where it came from, or what methodology he used.

Phillips said he would release the information publicly once he is finally finished.

It’s Tuesday, so Laffy was here…  Media Strategist Shawna Verner, currently working on media strategy for the recount effort, brought us up to speed with the latest.

Here’s Jezebel’s list of pro-women, pro-immigrant, pro-earth, anti-bigotry organizations to consider for your Giving Tuesday giving. If you’re feeling generous, I hope you’ll also support The Nicole Sandler Show. We really could use your help! While you’re at it, find another independent media source at TheLiberal.Media and support them too!

Matt Taibbi took down the finger-pointers at the Washington Post who are smearing fellow journalists from behind an opaque wall.

And if you find anyone using the offensive “Alt-right” term to describe the neo-Nazi white supremacist movement, share this from the AP with them.