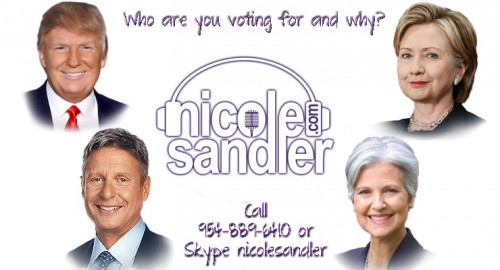 I didn’t get any “Gary Johnson”s, so we’ve got that going for us.

When I asked the question today, “Who Are You Voting For, and Why?” I knew I’d get a variety of answers. But I do admit to being surprised by the guy who claimed to be a Bernie supporter voting for Trump as a way of supporting Bernie. I only called one person an idiot today, and that was him.

I have been thinking about the answers and the passion from those who are voting for Jill Stein. Some people will – and we know that. I am just really concerned that Trump could somehow pull out a win, so I want all votes against him. But I know that’s unreasonable. So… you’re the ones. Embrace it.

But I expect to see you running Green candidates for local, station and national elections starting on November 9. You can’t just trot out a presidential candidate every four years and expect to make a difference.

Jon Stewart had a few things to say about D’ump last night at Bob Woodruff’s 10th annual benefit for injured service men and women (along with Bruce Springsteen and Jerry Seinfeld). I edited this slightly for time to play on today’s show…