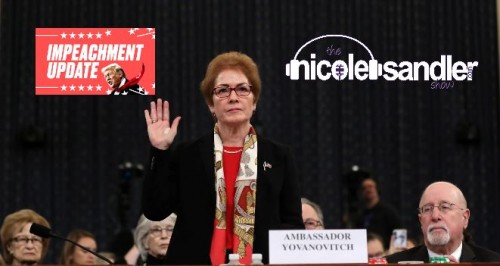 Today was the second day of public hearings in the impeachment inquiry into Donald Trump. Today, it was former Ambassador to Ukraine, Marie “Masha” Yovanovich, and the testimony was quite riveting. So much so that Trump, himself, tweeted such ugliness at her that even Bret Baier of Fox so-called-News said it was witness intimidation, “adding essentially an article of impeachment in real time as this hearing is going on.”

So, that happened. I’ll publish a podcast episode Monday to recap some of the rest of the testimony.

I thought we’d be able to do that today, but it wasn’t in the card. I invited my friends Dave Johnson and Thomas Neuburger (formerly known as Gaius Publius) to join me for an after-hearing discussion about the case… That’s not exactly what transpired, but it was an interesting discussion nonetheless…

In other news, Roger Stone was found guilty on ALL COUNTS!!    Couldn’t happen to a nicer guy….