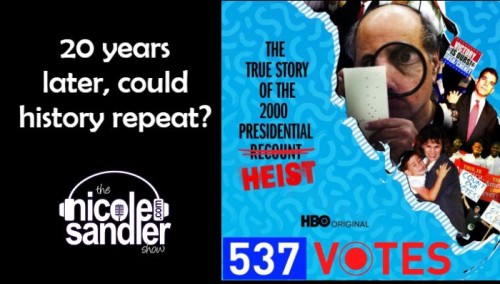 As you may know, this show is based in South Florida. I grew up down here.

But when election day 2000 rolled around, I was living in Los Angeles, and preparing to leave for Kazakhstan to adopt my daughter! In fact, as the entire election drama played out, I was in an apartment in Almaty, Kazakhstan, where the only English-language television was Fox (not) News. But I digress…

The eyes of the nation were on Florida, as it all came down to the sunshine state to determine who’d be president. Actually, it all came down to the Supreme Court, but lots of dominoes had to fall out of place before SCOTUS killed democracy. The Floriduh 2000 debacle is the subject of a new documentary currently airing on HBO called 537 Votes. The film’s director, Billy Corben, joins me today as we talk about insuring that history does not repeat itself in this case!

Since tomorrow is Halloween, today’s funny was an occasion-appropriate parody!

Here’s a scary one for you, from the Lincoln Project

I played a clip from Bruce Springsteen’s radio show on Sirius XM in which he makes very clear his feelings about Donald Trump and the need to vote. I promised someone in the chat room I’d post it here

We are lost. We’ve lost so much in so short a time.
On November 3rd, vote them out.

And for those who like to watch, radio on video