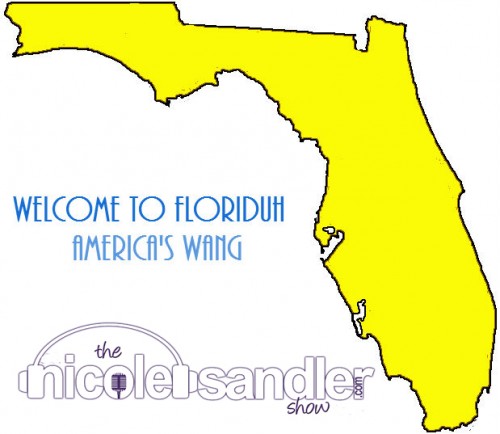 We used to do a weekly segment on the show featuring typical Flori-DUH stories, but you haven’t seen anything yet if you haven’t taken a look at Miami politics. Some of my favorite authors, including Carl Hiaasen and Dave Barry have made careers of writing about the dysfunction in the tip of America’s dick. But on this show, we examined the insanity happening right now in the Miami-Dade County Democratic Party.

I know you’ll be shocked to hear this, but there were shenanigans at play as some of the party  elders were trying to get their preferred candidate in place to run for the state party chair post using unfair means.

Thank goodness for my attorney! Seriously.

My husband and I are still suffering from George W. Bush’s presidency, as we’re deeply underwater in our home, and now in foreclosure. A dear friend introduced us to Bruce Jacobs and Court Keeley of Jacobs Keeley, PLLC. I really liked him when we first met to discuss the foreclosure and he found robo-signed documents among our papers(!)… but I really fell in love with him (in a platonic way) when I learned he, too, felt the Bern!

Bruce went to Philadelphia as a Sanders delegate and, after seeing what the party did to Bernie, he decided to get more involved. I have a feeling we’ll see Bruce running for higher office come 2018, but I’m getting ahead of myself…

He decided to join the Miami-Dade DEC (Democratic Executive Committee) by going through the proper channels. Imagine his disgust when he saw the people there doing what the DNC did during the primaries! So he’s fighting back.

Stay tuned… and be happy that Bruce Jacobs is on our side!