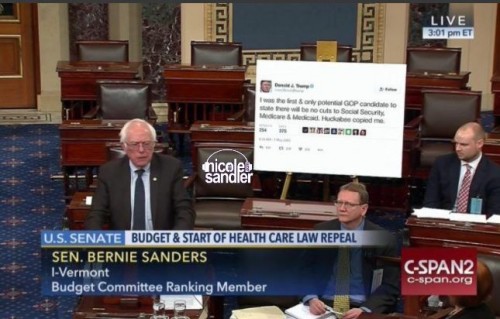 I’m back! And so is Bernie Sanders.

Quick… Bernie’s first action as “outreach director” (or whatever other dumb title was given to him in Senate Dem leadership by Little Chuckie Schmuckie) is a big day of ACA rallies around the country. He’s tasked Democratic members of Congress to organize events in their districts… but I live in Floriduh. So imagine my surprise when I called my congressman’s office to find there IS an event scheduled here.

Sunday, Jan 15, 2pm at the Sunrise Amphitheater…. about 10-15 minutes from my house. The following Saturday is the Women’s March on Washington. I’ve neither the funds nor the cold weather gear to go to DC, so I’ll participate in the one in Miami. This resistance stuff is hard work, but truly necessary. DO IT!

Today, I was happy to welcome Harvey J. Kaye back to the show. The Fight for the Four Freedoms author recently wrote a couple of articles we referenced today: “Progressives: Take Hold of American History” for BillMoyers.com, and “Rendezvous with destiny: Newt Gingrich’s long war against FDR and the New Deal enters its final stage” for Salon.com.