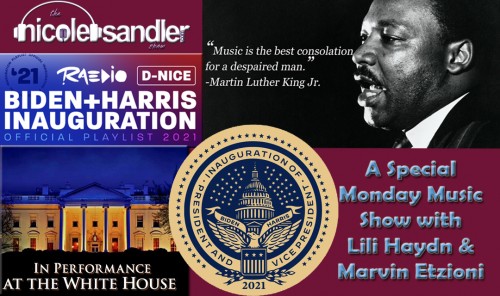 Happy Martin Luther King Jr Day! We have a special show today. It’s one that honors MLK and celebrates the fact that music is returning to the White House!

It’s been a vast, cultural wasteland for the past four years, but I got some great news about the musical treats in store as the Biden-Harris administration officially begins in just two days. I’ll fill you in, and then bring on Lili Haydn and Marvin Etzioni.

They’re two artists who both have new music out dealing with the strange times we’re living through right now. They each have a song perfect for MLK Day and, although they don’t work together regularly, they’re old friends who have written songs together, including one that’s on Lili’s new album, that we’ll also hear today.

The single for “Sayonara”, the last song we played is out now. The album More Love will be released on March 26.

Marvin Etzioni’s album What’s The Mood of the Country Now is out and available from all the usual digital sources, as is the single, “Love Letter to Democracy,” and “Lift You Up” from Thee Holy Brothers.

The old adage goes something like “music hath charms to soothe the savage breast”. Yes, I know. I thought it was beast too, but it’s breast. Either way, it does. And today, we welcome music back to the White House. Welcome back music. We really missed you!

I committed a bit of operator error when the show originally aired by forgetting to start the YouTube and Facebook Live streams. Thankfully, I was streaming on Twitter/Periscope- but killed that feed when I tried to get YT & FB going. Well, I edited them together for one complete video of the whole show: