It’s an Upside Down World 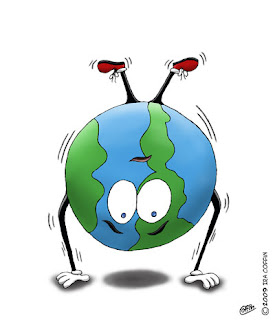 I’ve been singing this song for a while now.  In GOP land, up is down, in is out, and right is truly wrong.

Unfortunately, the Democrats in power aren’t helping very much to make sense of it either.

Yesterday, in advance of a sit-down with Republican party leaders, President Obama gave them something they’ve been wanting without asking for anything in return.  Seriously.  He just offered up no pay raises for most of the 2 million people who work for the federal government… Yes, middle class workers taking the hit again!

In case you were wondering, the freeze doesn’t affect members of Congress.

The freeze applies to all Executive Branch workers — including civilian employees of the Defense Department, but does not apply to military personnel, government contractors, postal workers, members of Congress, Congressional staffers, or federal court judges and workers.

Lovely.  So, tonight, our spinally-impaired leader meets with incoming Speaker John Boehner and Senate Minority Leader Mitch McConnell to do what?  Ask them, pretty please, to let the wealthiest citizens in the world’s wealthiest country to contribute a teeny weeny bit to help dig this nation out of the hole their party got us into in the first place?

One would think that the way to do that would be by bringing a bargaining chip.  But, as he did with the idea of a single payer health care system, President Obama gave it away before the bargaining dinner table was even set.

It’s like how he negotiated during his Thanksgiving basketball game… by getting an elbow to the lip, requiring a trip to the hospital and 12 stitches.

Today, the Pentagon will release the studio on the effects of repealing Don’t Ask Don’t Tell, and we know what it’ll say.  No big deal.  That’s now how John McCain and his fellow bigots will spin it.  Will the President do something?

The industry in which I’ve worked for 30 years is crying poverty.  I’ve been employed by Clear Channel a number of times; I still do some freelance work for them on a regular basis.  They’ve been making massive cuts in their workforce for the past few years, crying poverty.  But the news broke today that they just signed a 3-year $60 million contract with Ryan Seacrest.

It’s Tuesday…. and the world is still reeling from the wikileaks cablegate…. not!  If you listen to the administration, perhaps.  But what we have seen are some of the lies, secrets and backroom politics that the administration would like to keep from us.  Truthout‘s Jason Leopold will join me to tell us what more we’ve learned about this document dump.  Perhaps he’ll give us an early look at a big story on Gitmo he’ll be breaking tomorrow.

And in hour two, Gotta Laff from The Political Carnival joins in for our weekly discussion of live in this upside down inside out world.  Here’s some of what we’ll be talking about today…

Democrats with spine: The good news and the bad news

Another terrorist plot foiled due to intel provided by… a Muslim

Tweet: “Barack can use [whire hangers] if his kids get ‘punished with a baby’”.

And there’s a new Blunt… Don’t TSA me bro…