Deal… or No Deal? 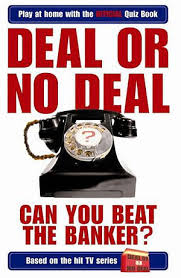 OK, so Obama caved. We knew he would.  He’s that type of president…. unfortunately.

I go back to my continuing meme of the Republican party living in some sort of opposite world, where up is down, in is out and right is always wrong (though they wouldn’t agree with that last one).  The party who’s been screaming about the deficit did everything they could to make sure the Bush tax cuts for the uber-rich in this country were extended… and to pay for those continue cuts they’re willing to borrow from China, Russian and anyone else who’ll lend the money.  Can someone please explain to me how that makes sense?

President Obama, while trying to rationalize going back on yet another campaign promise, said that some of us just want to continue fighting.  He has it wrong.  It’s not about fighting.  It’s about standing on principle and not giving in when the other side is so clearly wrong!  We understand compromise… but not giving up without a even trying. If he really wanted to send a signal to Congress that he was serious, he would have said he’d veto anything that extended tax cuts on income over $250,000.  But he didn’t.

Yes, there are some good things in this deal.  Unfortunately, President Obama’s lack of leadership is overshadowing them.

I’ll admit it: I didn’t think they had it in them. A temporary extension of the Bush tax cuts? Sure, they could manage that. Fear is a powerful motivator in Washington, and nothing scares politicians like the threat of a tax hike on their constituents. But an actual, negotiated deal, in which the two parties sit in a room and give things up, and compromise on positions they’d taken in public, and walk out with a deal that accomplishes more than was strictly necessary? I didn’t see that one coming.

The deal has something to annoy everyone — but also something for everyone. You’re a Democrat? The tax cuts for the rich are extended, and the estate tax deal exempts inheritances up to $5 million while cutting the rate heirs pay to 35 percent. But that’s why the Republicans like it. You’re a Republican? The tax cuts are only extended for two years, and they’re paired with 13 months of unemployment insurance, an extension of a variety of tax credits passed in the stimulus, and a new payroll tax cut — all of them deficit-financed. But that’s why the Democrats like it. You’re a deficit hawk? The deal adds more than $700 billion to the deficit. And, let’s be honest, you got nothing in return.

It’s important, however, to keep the actual policy in perspective. If you’re a Republican who argues that long-term uncertainty about tax rates and the deficit are the main problem for the economy, this deal only eases tax uncertainty for two years and it makes the deficit worse. If you’re a Democrat looking for more stimulus, this isn’t nearly enough, and most of what’s there is just an extension of programs that are currently in place. In reality, the politics of the compromise might mean more to the market than the specifics of the policy: The two parties actually have the ability to sit in a room and come to a compromise. That has implications far beyond yesterday’s tax cut deal. It suggests that we may see more get done in the next two years than many of us thought, and there’ll be more capacity to respond to crises than some feared.

So, what happens next?  Well, Senator Bernie Sanders went on The Ed Show last night on MSNBC and said he’d put up a fight!

That’s a start.  And the very motivated people at the Progressive Change Campaign Committee (PCCC) aren’t going to take this lying down.  If you want to help fight this deal, go to www.boldprogressives.org and sign up.  PCCC’s Senior Online Campaign Director Jason Rosenbaum will join me on the show this morning with their response.

I’ll also talk with blogger Susie Madrak who was on a conference call with the White House last night.  Though no Obama apologist, Susie points out that there is some good in the deal.

And she’s not alone in thinking that way.

Of course, as it’s Tuesday, Gotta Laff of ThePoliticalCarnival.net will join me in the second hour of today’s show to talk about all the craziness in the news, and share her latest Blunt video too…

Here are some of the stories we’ll discuss:

Ezra Klein: Can the White House win in 2012 by losing on the Bush tax cuts now?

Ed Rollins to Sarah Palin: “If you want to be a player, go to school and learn the issues…You’re no Reagan.”

Foreign press: Sarah Palin “shows the tact of a boorish drunkard bawling obscenities at a funeral.”