12-13-19 Nicole Sandler Show -Impeachment Advances, the UK Stumbles, and the Internet is Taking Over 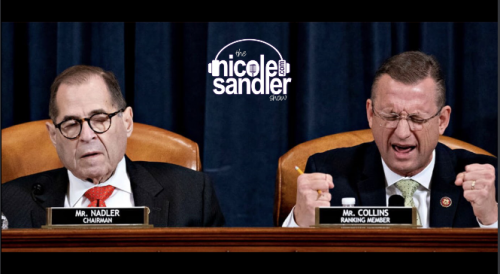 We wrap up a long and exhausting week on the show with articles of impeachment being voted out of the Judiciary Committee and now moving on the a full house vote. Great Britain went to the polls yesterday and completely blew it. Denis Campbell checks in from across the pond. And for a change of pace, we’ll move away from politics and on to the subject of how the internet has changed just about everything in our lives with Ramesh Srinivasan, author of the new book, Beyond the Valley. At least that’s the game plan as we begin the show…

Also, I mentioned a press release from Gym Jordan’s office from July 25, 2018 in which he touted introducing articles of impeachment for then-Deputy Attorney General Rod Rosenstein for the very same things they’re doing to obstruct Congress from performing its constitutional oversight duties.

The impeachment articles are the result of nearly 9 months of unsuccessful congressional attempts to force the Department of Justice (DOJ) to comply with oversight requests.

The failures cited within the articles include intentionally withholding embarrassing documents and information, knowingly hiding material investigative information from Congress, various abuses of the FISA process, and failure to comply with congressional subpoenas, among others.